Not sure what pellets for hunting to get?

I’ve exhaustively tested ALL the best 177 pellets for hunting on the market. In fact, I tested everything, including: accuracy, reliability, speed and so much more.

By the end of this guide, you’ll find the perfect pellets.

The 3 Best 177 Pellets For Hunting

If you’re pressed on time, here’s a quick list of the best 177 pellets for hunting: 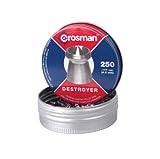 A weekend of testing these pellets was a fun project.

You won’t believe some of the results that I had with an air rifle pellet.

So great. So surprising!

The accuracy of Crosman’s dish pellet was spot-on.

Most of the use that I get from my break barrel air rifle is with small game and pest removal.

Testing for that scenario was a hodge-podge course of 15-35+ yards of paper targets, water bottles, and jugs, as well as the trusty ole soda cans.

Man, I set up a treasure-trove of targets to shoot at all over the dang place for this. I was on target for all of them the entire time.

The dish style pointed-pellet/hollow-point combo was true in its travel without fail.

The reliability of the Destroyers was pretty remarkable given the circumstances.

With all of those tempting targets dangling from trees and sitting atop every flat surface within 40 yards, there was A LOT of shooting done on day one.

Like a kid in a candy store, I was reloading over and over for hours. I went through almost two tins of pellets in one weekend.

Yes. That’s almost 500 pellets all by my lonesome.

There were less than a handful that I would call total duds. That’s crazy good for such an affordable little pellet.

Aside from the ridiculously difficult to open tins, my indulgently excessive shooting was almost entirely smooth and failure-free.

Just goes to show, the best tools for the job don’t always have to cost an arm and a leg.

This hunting pellet is designed for complete expansion and energy transfer. Not just impact triggered expansion….impact followed by expansion.

On the paper targets fixed to my trees, the expansion after impact was easy to see.

With some digging in the tree bark, I uncovered pellets that were penetrating several inches with the full bloom of the expansion.

On the bigger water jugs, the same results were visible over and over.

This advantage for my pest removal is a pretty big deal. Other expanding pellets tend to expand at the impact.

For critters like raccoons, woodchucks, or opossum, if my shot is not spot-on the pellet may strike bone and flatten without penetrating and killing the pest.

The good penetration through my target will get me past the bone and then expand in the soft tissue for humane extermination.

Getting it done with one shot isn’t just about skill in shooting.

Is the Crosman Destroyer Worth it?

The Crosman DS177 Destroyer Pellet is perfect for a one-shot kill of rodents and small game that are causing trouble around my home.

It’s also such a great pellet for paper range target shooting, and plinking.

The reliable performance with even and effective expansion is ideal.

So go out and get yourself some of these little fellas. Meanwhile, I’ve got a lot of cleaning up on the test range to do! Enjoy!

H&N Terminator Hollow Points: with an imposing name and a vicious look, these pellets are out for blood, garden pest blood that is.

The Terminator Hollow Points are designed for pest management and “extreme accuracy.”

Will these pellets have your yard in tip-top shape or your garden in shambles?

H&N’s claim to fame was the quality of their construction, so it’s a slam dunk here.

The material used is unpolished lead which is soft and malleable meaning it’s excellent for the “massive expansion” that is advertised for the Terminator Hollow Points.

The design is very similar to most other hollow point pellets on the market with one exception:

From the center of the head, a spike protrudes.

This assists in the initial penetration of the intended target. Additionally, there are notches around the rim of the hollow point that make it easier for the projectile to expand once it hits and enters something.

My only issue was that the pellets look a little bit rougher than what is shown in the advertisements online.

Mine came a little bit scratched up and the point was either dented or rounded enough to where I would not be able to poke myself enough to draw blood. This is extremely minor though because the performance is not affected by this slight discrepancy in looks.

I’m not sure if the point being rounded made much of a difference in effectiveness because I was still able to drop squirrels in one hit. It still gets the job done.

Now, remember this is still unpolished lead. Despite the high-quality construction, you’ll still need to clean your weapon of choice frequently to ensure good and consistent shooting

With that being said, the quality is exactly what you’d expect from H&N: Precise, solid, and dependable.

High-quality construction is useless if you can’t hit where you’re aiming; luckily you’ll have no problems with the Terminator pellets.

I used these pellets for two things: garden protection and regular ol’ plinking. I had a good time with both.

H&N has the Terminator pellets being extremely accurate at 25 yards or medium range.

I can personally attest to this. For about two days, I just sat on my back patio and shot at a paper target (with a backstop of course) to see how accurate the pellets actually are.

During my testing, I found that I was able to hit roughly one-inch groups at 25 yards and half-inch groups at 12 and a half. I took this accuracy as a go-ahead to start going after pests in my garden.

I must have gotten at least 6 squirrels in three days. Five out of six squirrels were clean one hits.

There was one instance where the pellet failed to expand and went clean through. The force was sufficient to shock and knock it over long enough for a follow-up.

This brings me to another important personal point:

I do not like squirrels, they have killed many of my plants over the years, but I think an animal suffering is unnecessary. I was very satisfied that I was able to have humane kills due to the design of the pellet.

While large exit wounds are not pretty, you can rest assured that you’re no putting anything in an undue amount of pain. The exit holes are quite large. The Terminators live up to their name and have a massive expansion, like H&N claims.

Another thing I was worried about was over-penetration.

I have kind of close neighbors and initially, I was concerned about hitting windows or houses, even though I was mostly shooting into the ground when I was on the hunt.

It was a relief to find out that these pellets are superb for semi-suburban pest control. I had no over-penetration. The hollow point design and large expansion radius lend itself well to controlled velocity loss.

This means that the pellets lost speed very quickly, usually landing on top of the group behind the animal or bouncing off a tree after passing through my target. This is a great pellet if you’re worried about hitting something unintentionally.

In terms of accuracy, the Terminator Hollow Points are a very solid choice, more so if you’re space is limited.

This is definitely worth the cost, especially among similarly priced pellets and brands.

Are the H&N Terminator Hollow Points worth it?

There’s no question about it. These pellets are a must buy if you plan on taking care of a pest problem via airguns and pellet guns.

The construction, accuracy, and practicality all come together beautifully in the H&N Terminator Hollow Point pellets.

The Crosman Premier Super Points are the best .177 pellets for hunters on a budget. 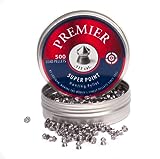 Crosman Premier is known for their dependable pellets, and the Super Points give you consistent, precise shots without breaking the bank.

But, how do they measure up against more expensive pellets?

The Crosman Super Points are made to precise specifications with a far-reaching tip to ensure good, dependable, shot-to-shot accuracy.

Hitting targets within a 50-yard range is no problem. From 40 yards, my average grouping was about 1.5” using the standard iron sights on my Remington Vantage 1200.

It’s not the best accuracy I’ve ever seen, but it’s good enough to get the job done, and a great value for the lower price point.

I’ve shot these through both the Vantage 1200 and a GAMO airgun, and these pellets gave me good, dependable accuracy in both.

The Super Points have a pointed, aerodynamic design to ensure the longest range possible.

Although these pellets worked great for me in my two airguns, the fit is very dependent on the bore.

The front drive band is wider than on most pellets, so trying to squeeze them into tighter-bore firearms may damage the pellet, or cause your gun to jam!

However, they fit looser-bore guns tightly, which can give you better velocity. From what I’ve seen and read, they seem to like rotary magazines the best.

Another thing to keep in mind is that the pellets are made from premium lead – which means they can be easily deformed. Make sure you use the flat part of your finger to load them into your airgun.

They’re wear-resistant and give a consistently good performance.

A couple of things to note:

Lead pellets get the job done well, but as mentioned, can be very soft and easy to deform. Make sure you’re very careful, and never drop them onto any hard surfaces!

Manufacturing consistency is also not fantastic.

Although head diameter is usually very consistent, this isn’t the case here.

The weight, on the other hand, is very consistent. We’ll discuss this more in-depth later.

Despite these couple of factors that have the potential to cause issues, these pellets give you clean shots and work well in most loosely-bore airguns.

Super Points will give you close to the maximum distance you can get with airguns.

They hold their velocity well, which helps with accuracy. Based on my measurements, their average velocity is around 900 FPS!

Before I used them for hunting, I tested the pellets by shooting some through cotton targets. While most other pellets barely broke through 2 layers, these easily went through 4 layers of 100% cotton.

Each Super Point weighs 7.9 grains. They’re a bit heavy to amount to Crosman’s claims of “maximum power” in an air rifle, but they still have impressive velocity and get the job done well.

The average head diameter on the Super Points is 4.52mm, and the average length is 5.37mm.

Although head diameter is usually a very tightly controlled parameter, the Super Points vary slightly from bullet to bullet.

It’s not a huge difference between each pellet, but it’s still something to take note of.

The weight, on the other hand, seems to be at a consistent 7.9 grains throughout each individual pellet.

It’s a very good value for what you get, and these are among the cheapest .177 pellets currently on the market.

They expand when they get in contact with the target, making them a great choice for hunting squirrels, groundhogs, or birds.

Serious airgunners can expect consistent, precise shots with these pellets.

If you’re a small game hunter on a budget, Super Points are a great choice.

I hope you enjoyed my best 177 pellets for hunting guide.

So as a recap:

If you’re looking for the best overall 177 pellets, I highly recommend the Crosman DS177 Destroyer.

Or if you are looking for accuracy, get the H&N Terminator Hollow Points.

If you’re on a budget, then the Crosman Premier Super Points is for you. It is affordable, consistent and precise.

Now I want to turn it over to you:

Which hunting pellets will you pick?

Let me know by leaving a quick comment down below.